Floaters are small specks moving in your field of vision.  There are often most obvious against a light colored background, like a white wall or blue sky.  Although the floaters look like they are in front of you, they are inside the eye.  Floaters are caused by very tiny clumps of the vitreous gel that fills the inside of the eye.   As we age, the vitreous changes in consistency and partially liquefies.  As it shrinks, it separates from the retina, which lines the inside of the back of the eye.  The areas of thickened vitreous are dense enough to cast a shadow on the retina when light enters the pupil.  What you see is the shadow of the vitreous floaters and they can have different shapes, such as dots, circles, lines, cobwebs, or clouds.  Because they are suspended in the vitreous gel, the floaters will move with head or eye movement.  Vitreous separation occurs at a younger age in people who are nearsighted.  The sudden appearance of floaters can be very alarming but is not usually dangerous.  Because they are thicker than the rest of the vitreous, floaters tend to settle toward the bottom of the eye over time, allowing them to fall outside of the field of vision.  For most people, they become less bothersome over time and surgery is rarely necessary to remove them.

The vitreous gel is normally attached to the retina around the optic nerve in the back of the eye and may attach to some of the blood vessels in the retina.  When the vitreous shrinks over time, it tugs on the retina at these sites.  The retina does not contain any nerves that sense pain, only nerves that detect light.  When these nerves are stimulated by the tugging of the vitreous, you see flashes of light.  You may have experienced this if you have ever been hit in the eye and seen “stars.”  These flashes are most commonly noticed in the dark.  As the vitreous continues to shrink, the attachments between the vitreous and the retina break and the light flashes resolve.  The flashes can happen off and on for several weeks or even months as the vitreous separates from the retina. 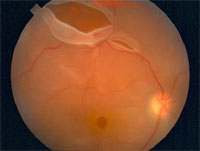 Sometimes the vitreous attachment to the retina is strong enough that it damages a blood vessel in the retina and causes a small amount of bleeding in the retina or into the vitreous gel.  This often results in a sudden shower of small, red floaters.  Most of the time, the body’s healing mechanisms are able to clear the bleeding in a short time and surgery is not necessary.  Occasionally,   the vitreous pulls hard enough that it tears a hole in the retina.  If this happens, it is always a serious problem because it can lead to a retinal detachment.  Small retinal tears or holes can be treated with a laser procedure to prevent the retina from detaching.  A retinal detachment is often accompanied by the gradual loss of vision, like a curtain being drawn over the field of vision.  Surgery is required to treat a retinal detachment.

An examination by your eye care provider is recommended for new floaters, especially if accompanied by flashes of light or decreased vision.