A cataract is a clouding of the normally clear lens of your eye. For people who have cataracts, seeing through cloudy lenses is like looking through a fog.  Most cataracts develop slowly and don’t disturb your eyesight early on.   At first, stronger lighting and a change in your eyeglasses may help.  As cataracts progress, the following symptoms can occur: decreased night vision and glare or halos from lights, fading of colors, and seeing double images with one eye.

The lens is located behind the colored part of your eye and is a living and constantly growing structure.  The lens focuses light that passes through your pupil, producing clear, sharp images on the retina — the light-sensitive tissue on the inside of your eyeball that functions like the film of a camera.  Over time, the lenses in your eyes become less transparent as more and more layers of tissue are laid down inside the capsule that surrounds the lens.  Eventually, the layers become so compacted that it becomes difficult for nutrients to reach all of the layers.  As the cells in the lens become damaged or die, the tissue becomes increasingly opaque. 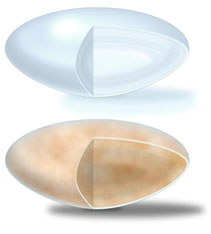 There are many types of cataracts but the three most common age-related cataracts are:

Nuclear Cataracts: A nuclear cataract may at first cause you to become more nearsighted or even experience a temporary improvement in your reading vision. The lens gradually turns more densely yellow and eventually turns brown. This color change results in a gradual loss of vibrancy of color and difficulty distinguishing between some shades.

Cortical Cataracts: A cortical cataract begins as whitish, wedge-shaped opacities or streaks on the outer edge of the lens cortex. As it slowly progresses, the streaks extend toward the center of the lens, like the spokes of a bicycle wheel.  When the cortical spokes extend into the part of the lens visible through the pupil, they interfere with light passing through.  Problems with glare are common for people with this type of cataract.

Posterior Subcapsular Cataracts: A posterior subcapsular cataract starts as a small, opaque area that usually forms near the back of the lens, right in the path of light on its way to the retina. A subcapsular cataract often interferes with reading vision, reduces your vision in bright light, and causes glare or halos around lights at night.  This type of cataract can develop rapidly, can be associated with use of steroids, and often occurs at a younger age than the other types of cataracts.

The rate of cataract progression varies from person to person and sometimes between one eye and the other.  Most age-related cataracts gradually become worse over years.  Diabetics and people who have used steroids (including inhaled steroids for lung problems) tend to get cataracts at a younger age than others.

Surgery is the only effective treatment for cataracts.  No medications, dietary supplements, eyedrops, or exercises have been shown to prevent or cure cataracts.  Surgery should be done when cataracts cause enough loss of vision to interfere with your daily activities.